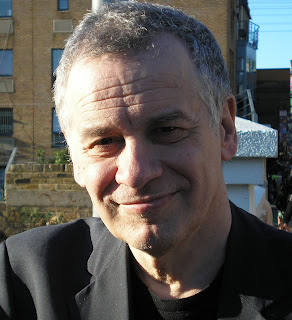 Some of the facts are these: I was born in Gibraltar and lived there until I was sixteen, when I was sent to a boarding school in England to do my A levels. I stayed on to university (King's College London) and a couple of years later my parents and sister Lesley emigrated to join me in London.

I was influenced to read contemporary poetry by the late Professor Eric Mottram at King's, and so became involved in the London post-avant poetry and small press scene from the late 1970s. I was also writing and publishing short stories in such magazines as Transatlantic Review and Emma Tennant's Bananas.

There's a Wikipedia entry on me that someone compiled, heavily biased towards my poetry and publishing activities. It's mostly accurate.

After co-editing Alembic magazine, I went on to found and run Reality Studios magazine, publishing experimental writing of all kinds, between 1978-88. The Reality Studios imprint merged with Wendy Mulford's Street Editions to form Reality Street in 1993. Wendy retired from publishing about five years later, and I have run Reality Street, which publishes innovative poetry and prose, on my own since then. Reality Street no longer publishes new titles. In 2019 I started a new imprint with Brian Marley, in the first instance publishing our own prose writing: Grand Iota. This is now a developing story: we're starting to publish a wider range of prose writers from the UK and the US.

After leaving college (I later trained as a teacher at Goldsmiths but never got into that profession), I worked briefly in publishing, then spent three or four years working in short-life housing, including a brief spell founding and participating in a writers' and artists' commune at Lower Green Farm, Orpington. Then I had a job for eight years in a small south London project supporting work with single homeless people, before moving into journalism, first with the National Council for Voluntary Organisations, and then throughout the 1990s as a freelance layout sub-editor and occasional feature writer. From 1998 until 2014 I edited house journals for the NSPCC and the Royal College of Nursing.

I married Elaine Randle in 1999. In 2004 we moved from London to Hastings, and subsequently St Leonards-on-Sea, East Sussex, where we now live in a house full of music. (For my musical activities, see elsewhere on this site.)

There is more to come, I hope.


(footnote:)  For those who have googled me – the Ken Edwards Building at Leicester University is not, sadly, named after me, but I hope to visit it one day.

Also – I am not, repeat NOT the author/illustrator of the ghastly My Little Pony books.