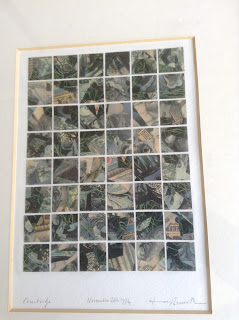 Just when I was feeling a bit gloomy – a wonderful surprise in the mail. I wasn't expecting a large package, but when I opened it, a framed picture emerged: a collage by Tom Raworth, signed and dated Cambridge 1994.

It had been sent by a long-time Reality Street supporter, in recognition of my "work in poetry over the decades", one of four similar collages he was disposing of because he was downsizing to a new home and no longer had room for much of his art collection.

It will receive pride of place in our house in Hastings. Thank you.

For the past year or so I have been writing A book with no name. (This is not the novel that's coming out later this year from Unthank Books; that has a name, which is Country Life.) (Though A book with no name is in fact the name of A book with no name. Got that?) (And I'm writing another novel called The Grey Area, but that is in its early stages, and need not concern us here.)

Anyway, some extracts have appeared or are about to appear. Last year, three were included in issue 2 of Litmus Magazine. Now some more. In the very wonderful Golden Handcuffs Review, which has just reinvented itself as a regular anthology, there are six pieces: "Frequently asked questions", "Dialectics", "It", "Nobody there", "Fall" and "Persons". And in Unthank's new Unthology 7 (it will be launched in June - the link shows you the previous volume in the series) there will be "Infinity".

I don't know when the entire book will be published. It's more or less finished.

Here as a taster is by far the shortest piece. This is "It":


It is this. It is. Or is it? It may be. But then again it may not. It can’t be determined. Could it? No it couldn’t. We can’t determine whether it is. Or what it is. It isn’t possible to do so. We can speculate about it. We can make assertions about it. We can construct narratives about it. But it’s not possible to do much more. That’s what it comes down to. It comes down to not much more than that. And that’s about it. So it’s time to look outside. What is it doing? It’s raining. This is it.

Welcome to my new blog. Actually, it's going to be a personal website with biographical and bibliographical information and some music too, and a blog attached. But it's still under construction. The blog currently on the Reality Street site will become a purely Reality Street blog and "my" page on that site will then feature only those of my books that happen to be published by Reality Street, and this thing here will be for everything else. More soon.
Posted by Ken Edwards at 12:24 No comments: