The Grey Area - out in January

My new novel The Grey Area will be published by Grand Iota in January 2020. 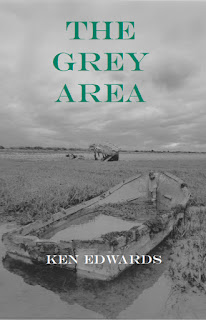 You can read a few excerpts from it in earlier posts on this blog.

Grand Iota is running a subscription scheme to enable it to publish this book alongside Fanny Howe's Bronte Wilde, an early novel of hers, now revised and set to be published in the UK for the first time.

So if you'd like to sponsor publication of my book and Fanny's, please head over to
the Grand Iota website.

from part four of WILD METRICS

Every day the future comes nearer; every single day that passes, and they pass much more quickly now, it approaches; but it gets no clearer, no more decipherable than at the beginning – the beginning? – what I mean to say is, at the time when I was closer to the beginning, when my senses were more rudimentary. And now as I bring myself to write this, in many ways it gets more difficult, because I am no longer relying on those long-ago set-down accounts of what happened, and when, and wherefore, etc etc; no longer building on those familiar narratives but on the thin air of now. You know, like the cartoon character running from some assailant towards the cliff edge and continuing to run beyond, without noticing for a short while thereafter that there is nothing to support his pattering little feet until he looks down and then of course the shock of awareness, of seeing for the first time the yawning space beneath him, provokes his belated downfall. It’s a familiar trope, perhaps rather hackneyed by now, but an apt one I think. So anyway the awful thought comes that the future, outside the frame, is actually down there. And looking back, well, all of that seemed solid at the time, more or less in focus, and there was a lot of it to build on, but still, it’s now slipping out of reach. Not forgetting that the time to come is far less capacious, I mean there is less of it. So I’d better hurry, or it will be used up.

Not forgetting. That’s the thing. That would be good. How can we imagine the future if we have no access to the past?

The future can only ever be imagined. It never arrives. It can be brought to mind by being out of mind, by stepping off the clifftop of memory. Oh, such tedious metaphors – enough. I only have, as my resource, autobiographical memory, which is telling a story, which is in essence a pattern-making activity, a creative response to events that have occurred, or may have occurred. The neurologists tell us that memories are not records stored in the filing cabinet of the brain, waiting over the years to be retrieved. They are built anew each time we try to retrieve them, when we create a mental representation on the fly of something that may or may not have happened, but somehow has left its mark. A trigger can activate the representation by firing a node in the network in which the sources are encoded and which connects them together. Memories are, say the neurologists, about optimising decision-making in the future. But there is no guarantee they represent verifiable facts. They are distributed widely in the brain across interconnections, with immense potential for interference. When they lapse, it is not because storage space is at a premium. They fade when the connections degrade. I am reminded of the difficult last years experienced by my wife’s father, who struggled as he entered his nineties to piece together the remnants of his memories while coping with the frayed interconnections in his brain that would have assisted the pattern-making; and how he tried to create new patterns that didn’t make any sense but at least enabled some kind of temporary stringing-together that would hold for now. It was especially poignant as he had the reputation of being a storyteller, in his prime holding audiences fascinated with his tales of life in rural Norfolk before the Second World War, an activity he called “yarning” that had a tradition in the annals of the family, for one of his uncles had been a raconteur, with a fund of texts he had written that, when performed for entertainment in the evenings, he had called “recitations”, texts that after he died his widow had burned, for reasons never explained; and another uncle had actually written books about life as a mole-catcher and a railway signalman in the Fens which had become popular, and he had appeared on regional television in the 1970s in a regular series of programmes on rural life, being interviewed wearing collarless shirt and neckerchief, a faux-rural garb foisted upon him by the programme makers which he would never have worn in real life. And so my wife’s father had carried on the tradition, keeping family and friends entertained and amused with his yarning, until his brain cells started to die and the pattern-making began to strain credulity. He would ring us up, worried that his wife’s (my wife’s mother’s) bicycle was not to be found in the garden shed, deducing from this that she had been held up at work for some inexplicable reason, what could it possibly be? and had to be gently reminded that the bicycle had gone very many years ago and that his beloved wife had died almost as many years ago, and the world he was attempting to re-create had not existed in reality in all that time.

In memory, the world is created – re-created – every day, every single moment, becoming new again, bringing into existence the possibilities of new futures, in a fluid state, enhancing survival. Memory is a catastrophic breaking-free, a benign catastrophe, if you will. As suggested by the poet and artist Allen Fisher, who makes an appearance in the pages you have just been reading, and who remains to this day a friend of mine, it is a vital component of the pattern-making we need to do each day as a means of surviving – knowing about it and knowing how we know. With its loss or degradation, all the principalities and echelons of existence are obliterated, their hierarchies flattened, their glitter dispersed, and time shatters to its atoms, its instances separated out so that they can no longer be inspected from front to back and back to front again and be seen as cohesive, as elements in a system that can be worked with and worked through.

But what of those many pages that bring us up to this point? Where are these vaulted spaces they try to conjure? What is the time that is being evoked? I seem to remember it, anyway, whether through inventive or consistent memory. It is a good forty years since the events that inspired this narrative actually occurred, and the evidence for them is naturally incomplete. So I have laboured to complete the narrative by discovering or inventing connections, trying to fill the gaps with consistent or invented memories, vainly as it happens, because the more you fill in the more new gaps appear, triggering new memory-connections, fractally self-similar, a process, as I have already surmised, that could extend infinitely – within the unknown constraints of the capacity of the human mind anyway – so when might you call a halt and say this is ridiculous, what is the point? Has the point, if there is one, been made? Has it even been reached?

But then of course the realisation becomes apparent: that the gaps that appear, and keep on appearing in new places however much you toil to fill them, are inevitable and necessary. As Edwin Muir has written of Kafka: “We know the end he had in mind for all his stories; but the road to it could have gone on forever, for life as he saw it was endlessly ambiguous; so that there seems to be a necessity in the gaps which are left in his three stories [The Trial, The Castle and America]; if he had filled up these gaps, others would have appeared.” The process is inexhaustible, that is why it is called process; the framing is arbitrary, the decision to allow ellipses, and in particular the big ellipsis that occurs at the very end of the narrative, to be themselves, has to be made at some point decided by the author because there is no objective point of completion, not ever, no closure, to use a now fashionable word. And then the story can breathe, and live on, live with its indeterminacies, transferred from the imagination of the author to the imagination of the reader and left in safe-keeping there to be done with as the reader may wish.

And the obvious corollary to all this is the medium itself of the narrative, the question of the language with which it is conveyed, for it needs a conveyance of some kind and I’m doing the best I can here. All I have at my disposal to render these events or my take on these events, which may or may not have happened, is the words you are reading right now, but what are these double entities of moving air and reposing ink? They are slippery and elusive, they do not always mean what you think they mean, their relation to those long gone or imagined events is not simple, their relation to you, reader, is not simple. Their tendency to take over and obscure some imagined truth vies with their purported aim of rendering that truth plain and simple. Poetry is involved in that business, of course, but I’m not going into that here; perhaps I’ll return to it later. At any rate, language, like that other system known as the scientific method, is a different world from the world of the real, it’s a code that enables glimpses of how someone might imagine the real, and thereby have some dealing with or accounting for it, but the real is not really here, and maybe it’s the place I now only dimly remember, where the talking dead are – or is it the place where I am now as I write or where you are now as you read these words, as you turn the page, either physically taking up the edge of the paper and flicking it over or else commanding this movement electronically with a sweep or tap of your finger?

Another extract can be read at Molly Bloom 18